The courage to
entrepreneurship

The courage to
entrepreneurship

"Autumn 1949 – It is almost impossible to describe our own mood as well as the mood of the population in words. There was an euphoric mixture of liberation, catastrophe and spirit of optimism everywhere", said Helmhold Schneider, as if it were yesterday.

"It was sunny autumn day in 1948 as my father grasped the opportunity and purchased a company in Altenkirchen with four plastic Bakelit presses. It was the firm belief that synthetic plastics belonged to the future as raw materials such as timber and iron were rare and expensive at this time. He saw another huge benefit in the molecular specific design of their area of application. With this vision and the purchase, the foundation stone was laid for the WERIT factory.

The purchase of the plastic Bakelit presses combined orders for an electric global corporation Voigt & Häfner in Frankfurt. The pleasure to be able to supply this large corporation did not last long as one year later, the corporation terminated the orders so that they can produce in Holland themselves.

I decided to create my own range of electric connecting elements so that I would never be dependent on a single customer again.

"The fascination of creating something new from synthetic plastics is the foundation of the corporate philosophy today and is a part of the entrepreneurs DNA."

In the mean time, the trend in plastic processing went towards injection moulding and a offer of thermoplastics. I purchased several injection moulding machines and looked for companies where conventional materials could be substituted by plastics and thus, already produced the one-millionth plastic flushing cistern in 1964. But before that, already in 1953, I received an invitation from the Bayer factory for a study tour to the USA and visited companies of the automobile industry that manufacturer particularly light but extremely strong body parts made of fibre glass. Back in Germany, I developed a machine that could manufacture moulds such as safety helmets, and registered it for patent. It was a huge success that laid the financial foundation for the further expansion of the company. I invested in large injection moulding machines, e.g. for bottle crates and in the construction of the to date largest extrusion blow moulding machine for plastic tanks with a filling volume of more than 5,000 litre.

"We keep on inventing ourselves - it has always been like that"

With a long-term vision for future-orientated products, at the end of the 1970´s, we developed our 1,000 litre container on a pallet. The so-called IBC (Intermediate Bulk Container). It replaced the existing steel containers, and a gigantic IBC market developed within the following ten years.

My sons Ekkehard and Jörg followed me into the company in 1982 and 1994 and became shareholders.

We founded other locations throughout Europe and developed ourselves to plastic specialists. Today we are also thinking about tomorrow, are not standing still and are always reinventing ourselves, it has always been that way. 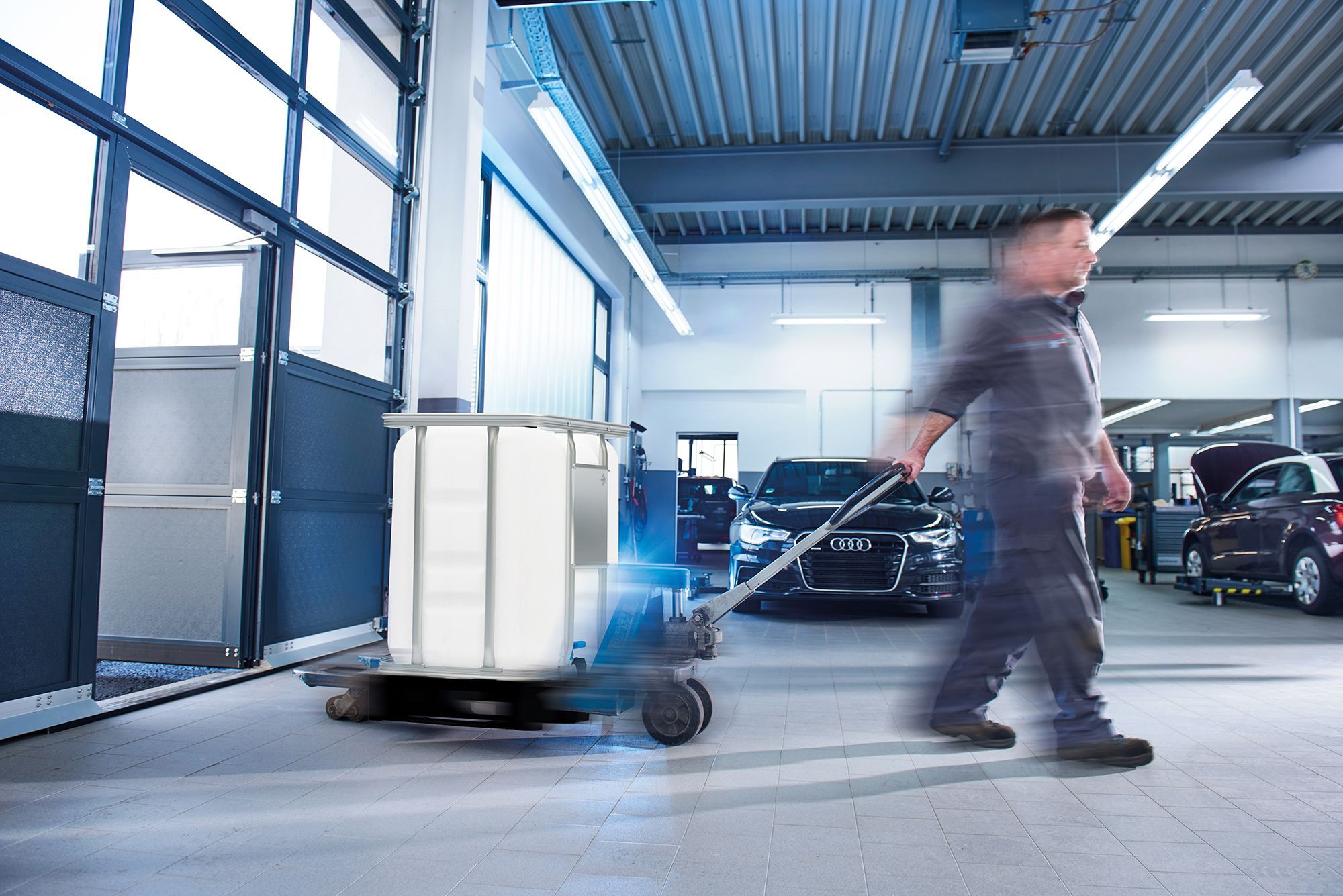 Production start of the worlds first 300 litre IBCs, the COMPACTline as well as enhancement of the specifications. 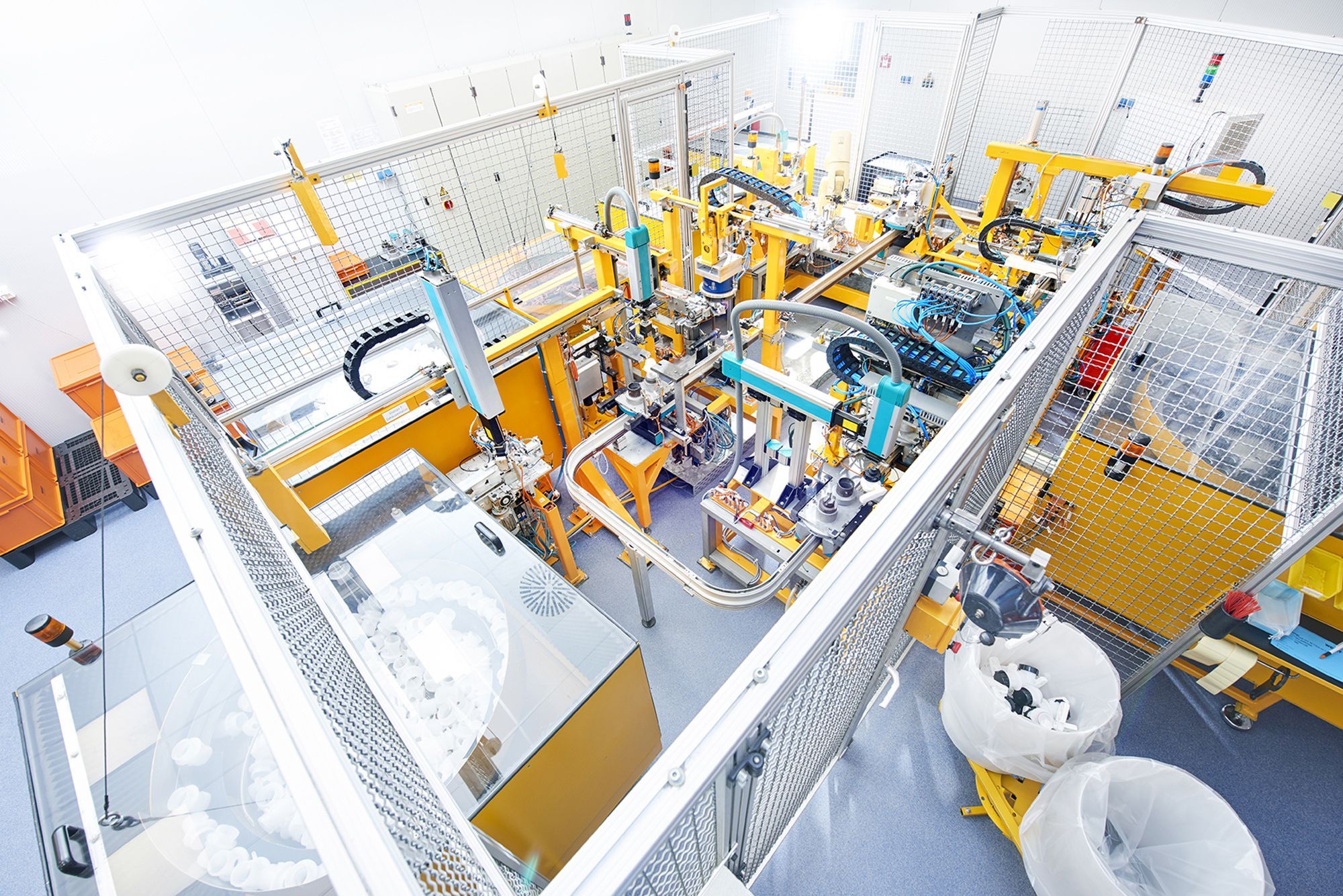 Production start of a clean room production in Altenkirchen (Germany).

Expansion and extension of the locations Montélimar (France), Błonie (Poland) and Bludenz (Austria). 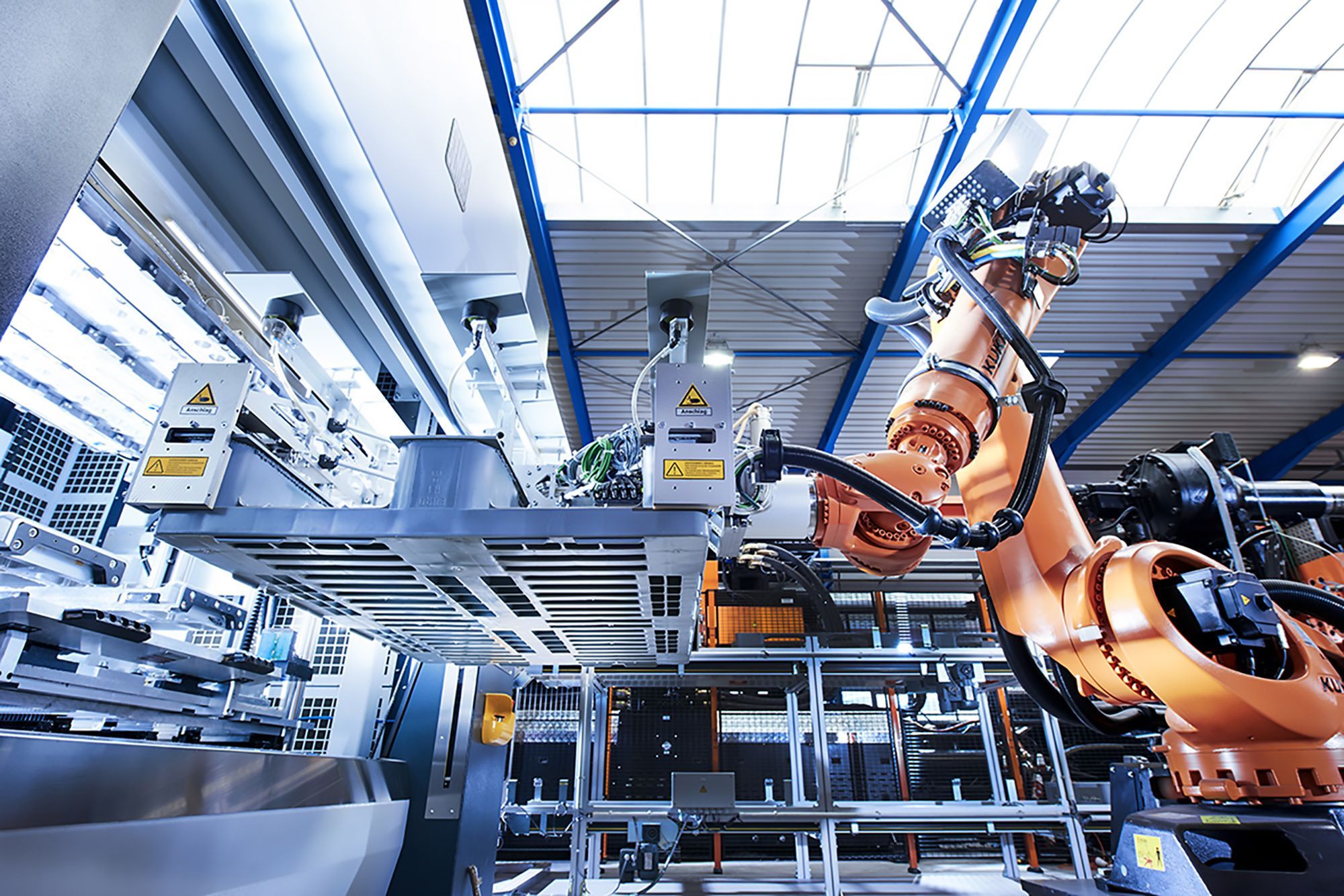 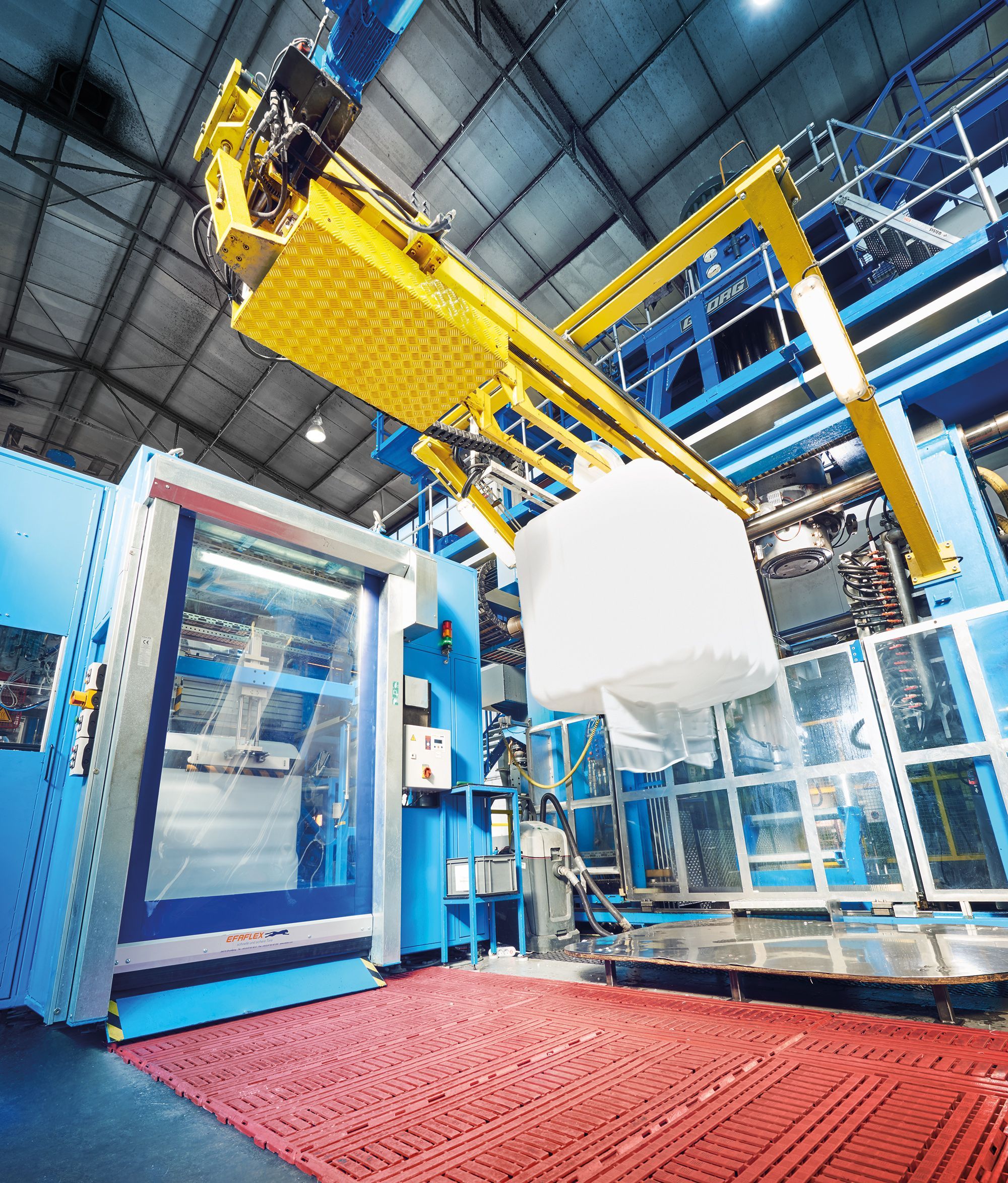 Development of the antimicrobial (self-cleaning) IBC, the STERiline. 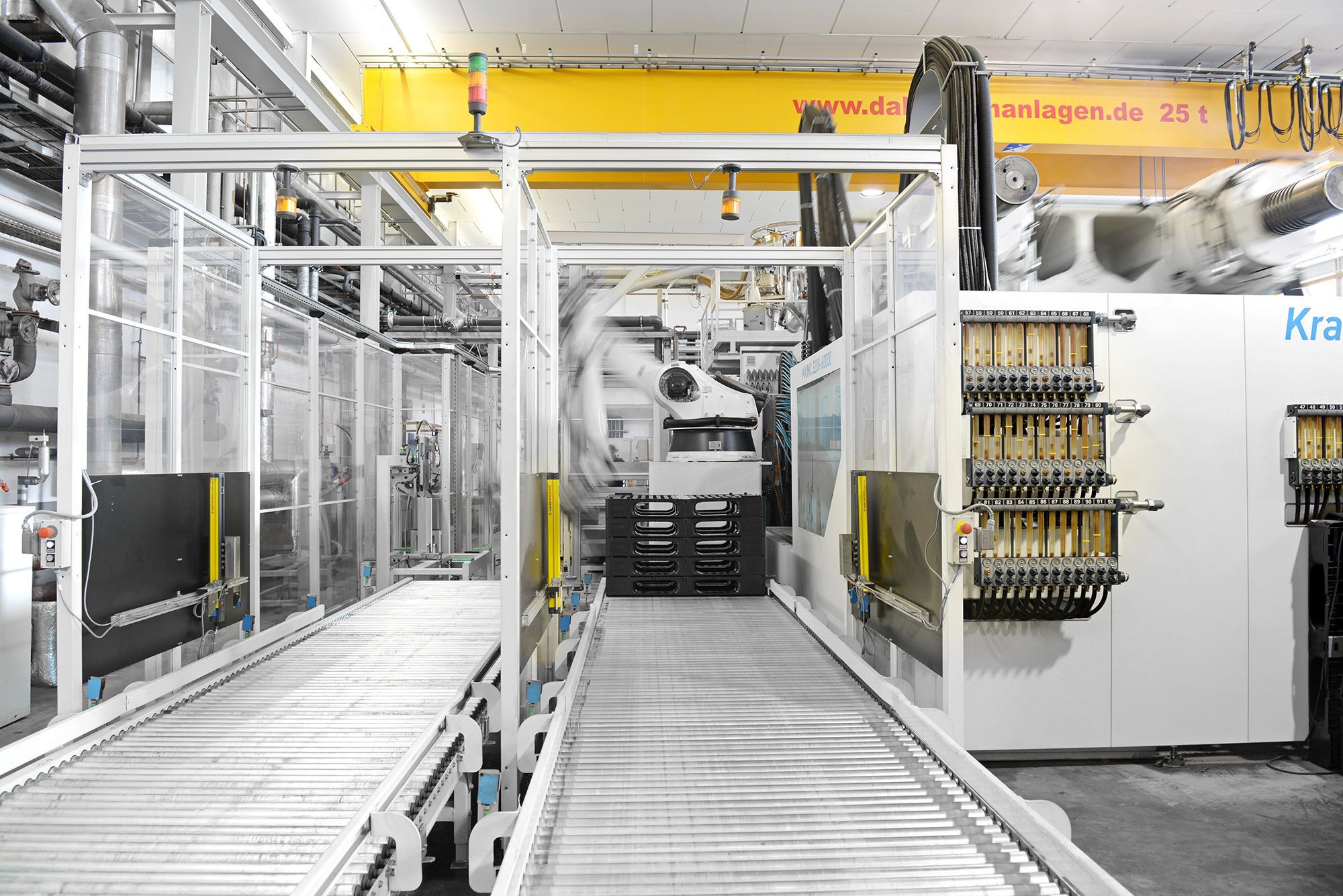 Construction of a large pallet injection moulding facility in a new production hall at the Altenkirchen location. 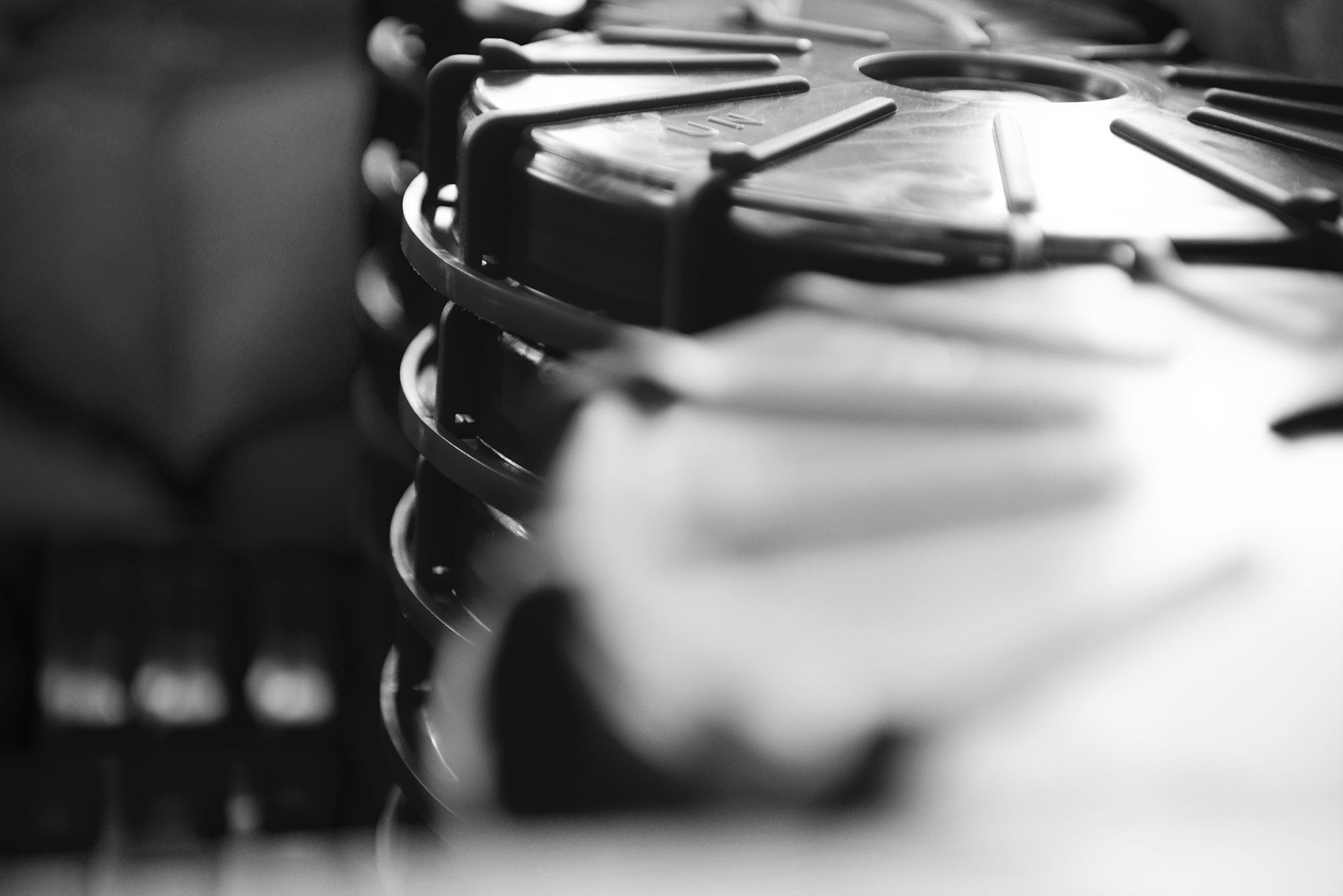 New injection moulding machine in Altenkirchen with 160 tonnes and 250 tonnes clamping force for the production of IBC accessories. 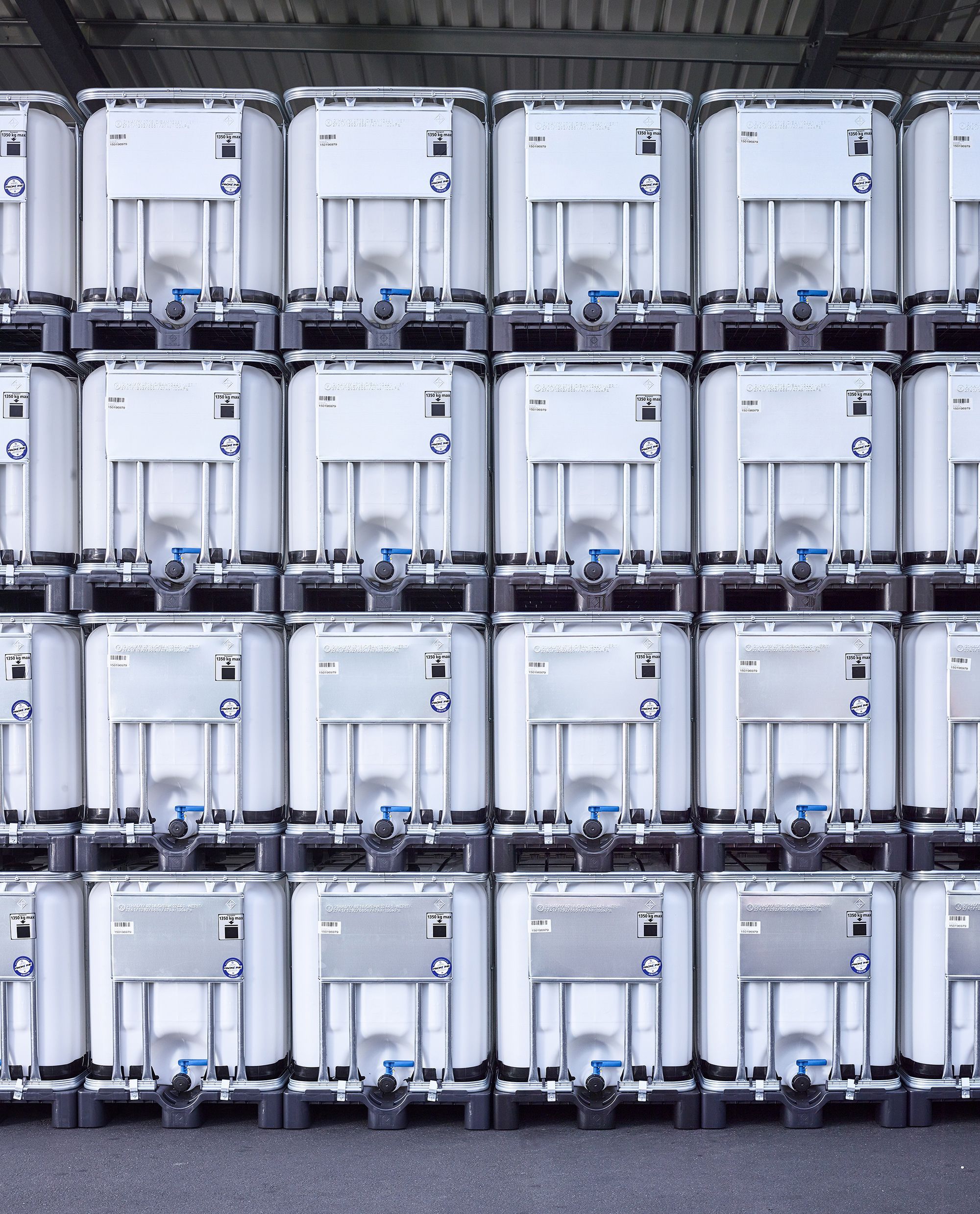 Establishment of the PACKONE - System for the reconditioning of industrial packagings throughout Europe.

Inauguration of the new factory in Manchester, Great Britain. 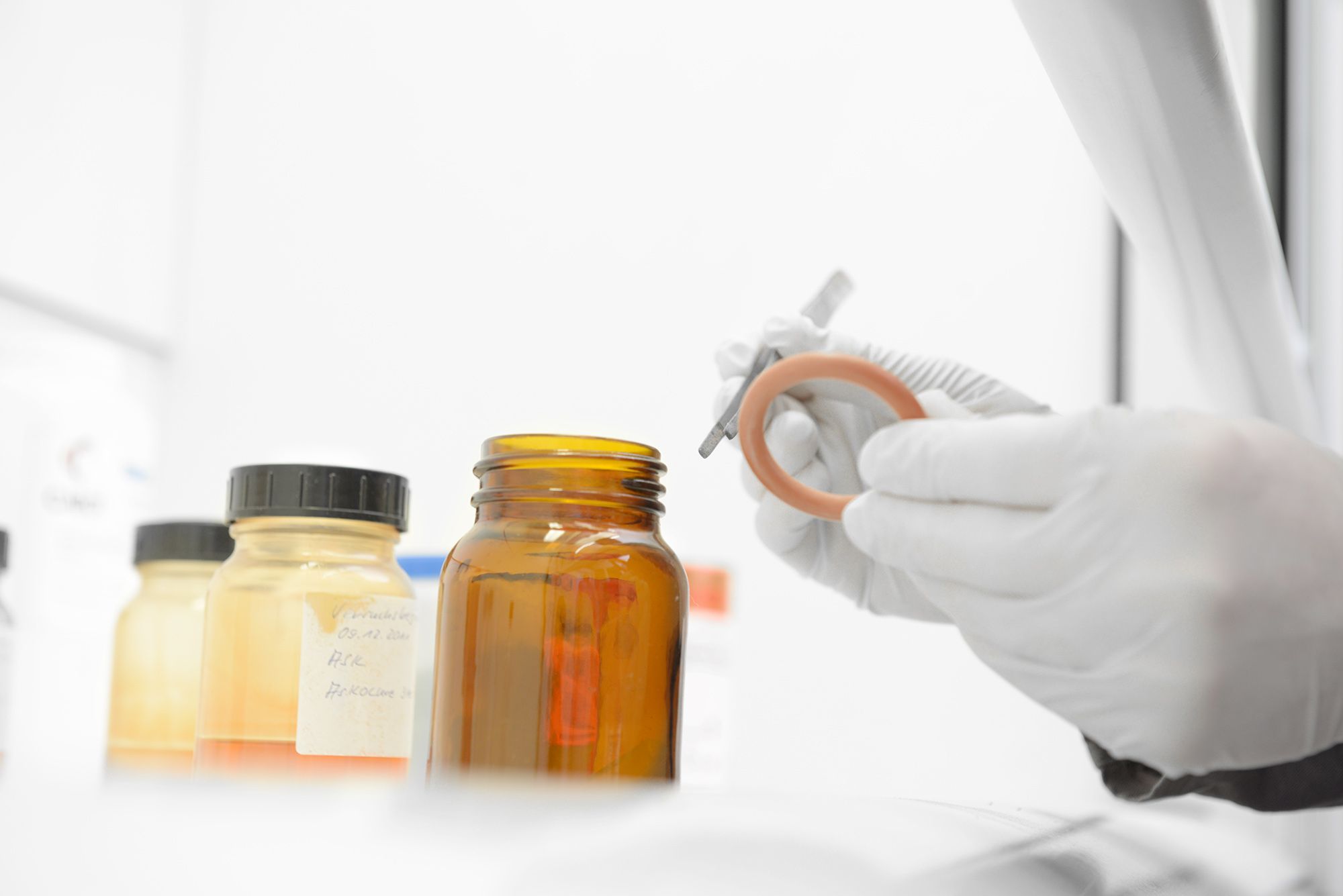 Development of the POLYex IBC with a conductive plastic outer surface. 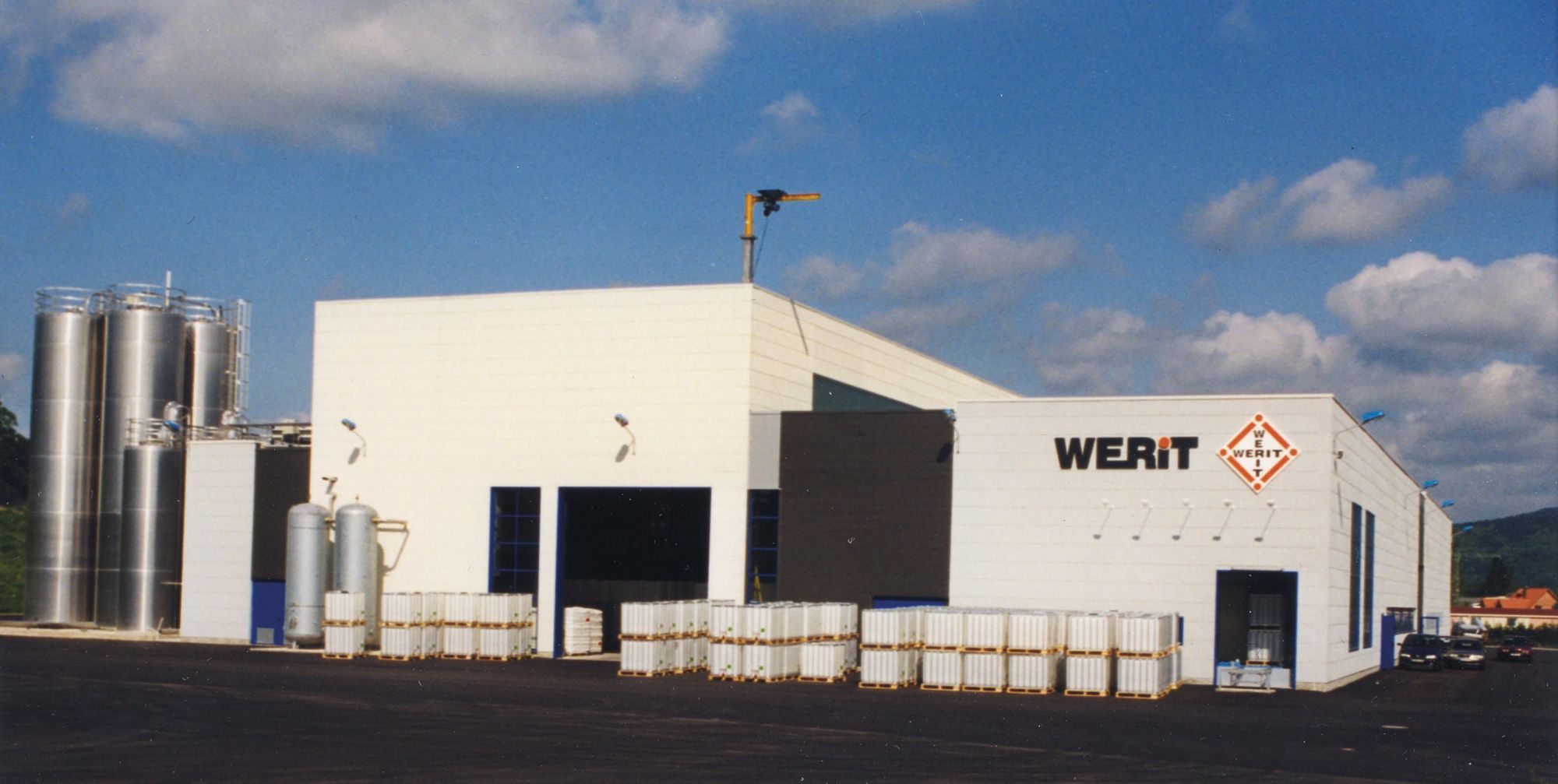 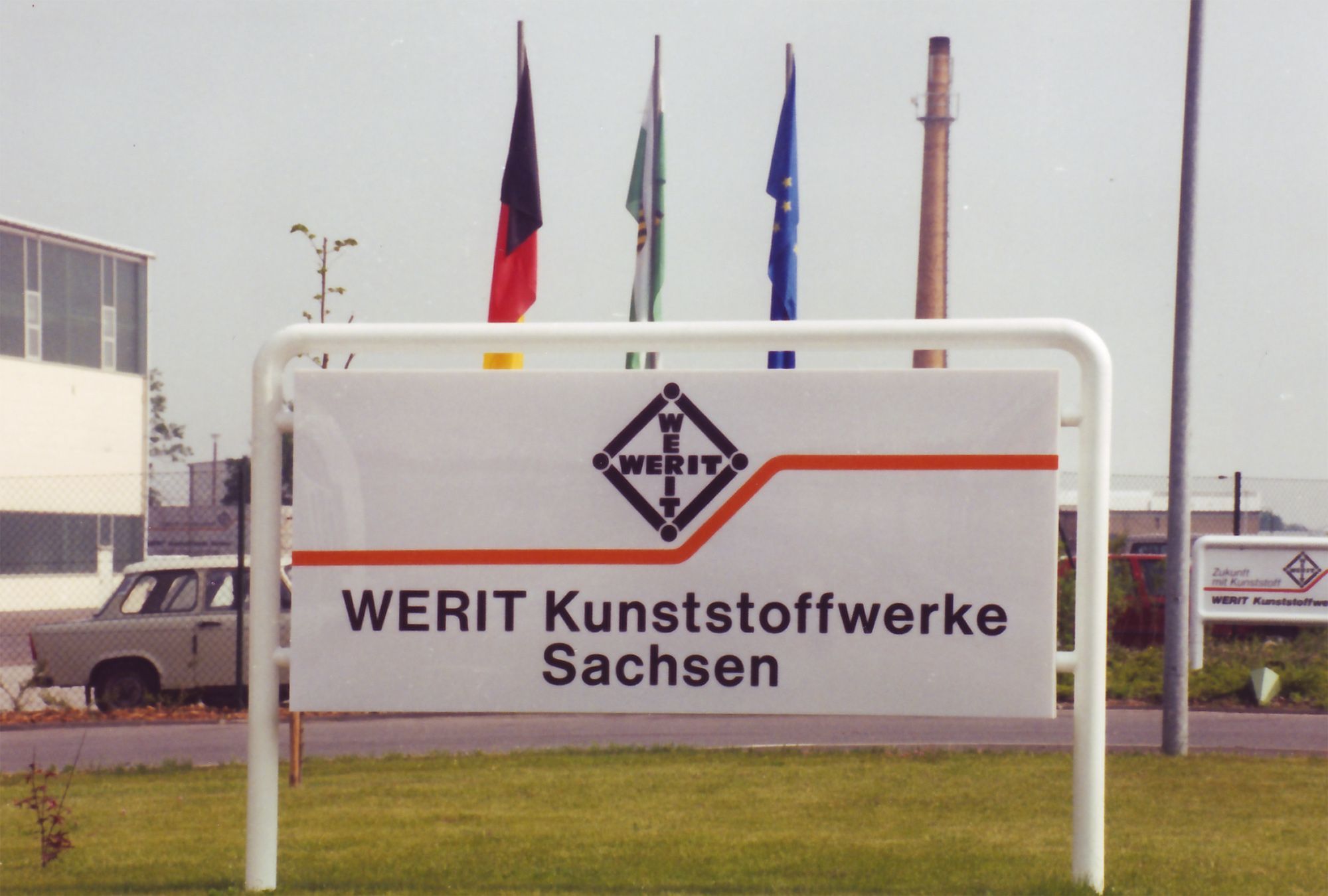 WERIT was one of the first industrial companies to establish a subsidiary in Germany’s new Federal States, called WERIT Kunststoffwerke Sachsen in Ottendorf-Okrilla. 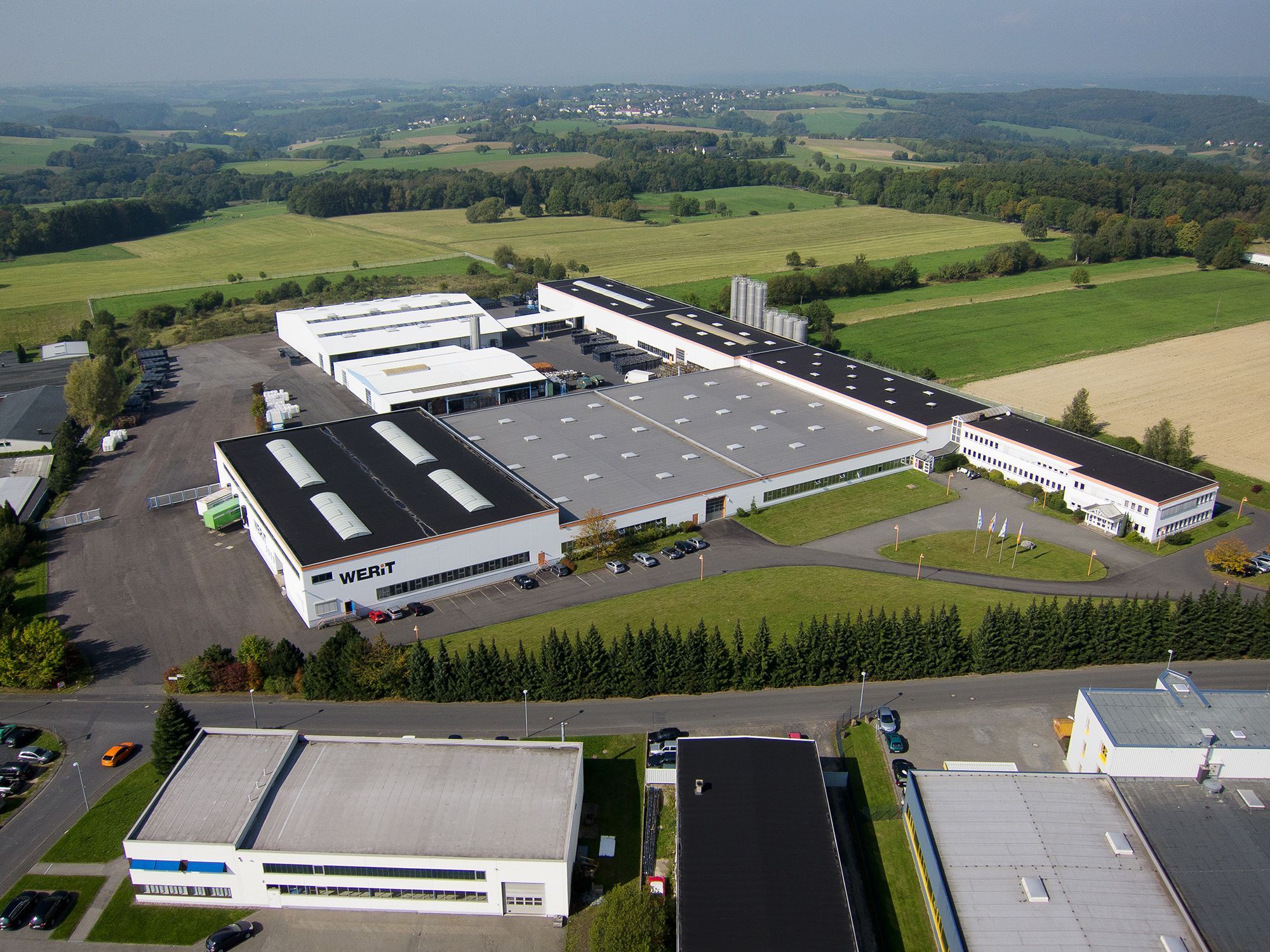 JOMO Sanitär-Kunststofftechnik was established as a new company after the Cologne-based company Josef Mohr GmbH had been merged into the Group in 1978. 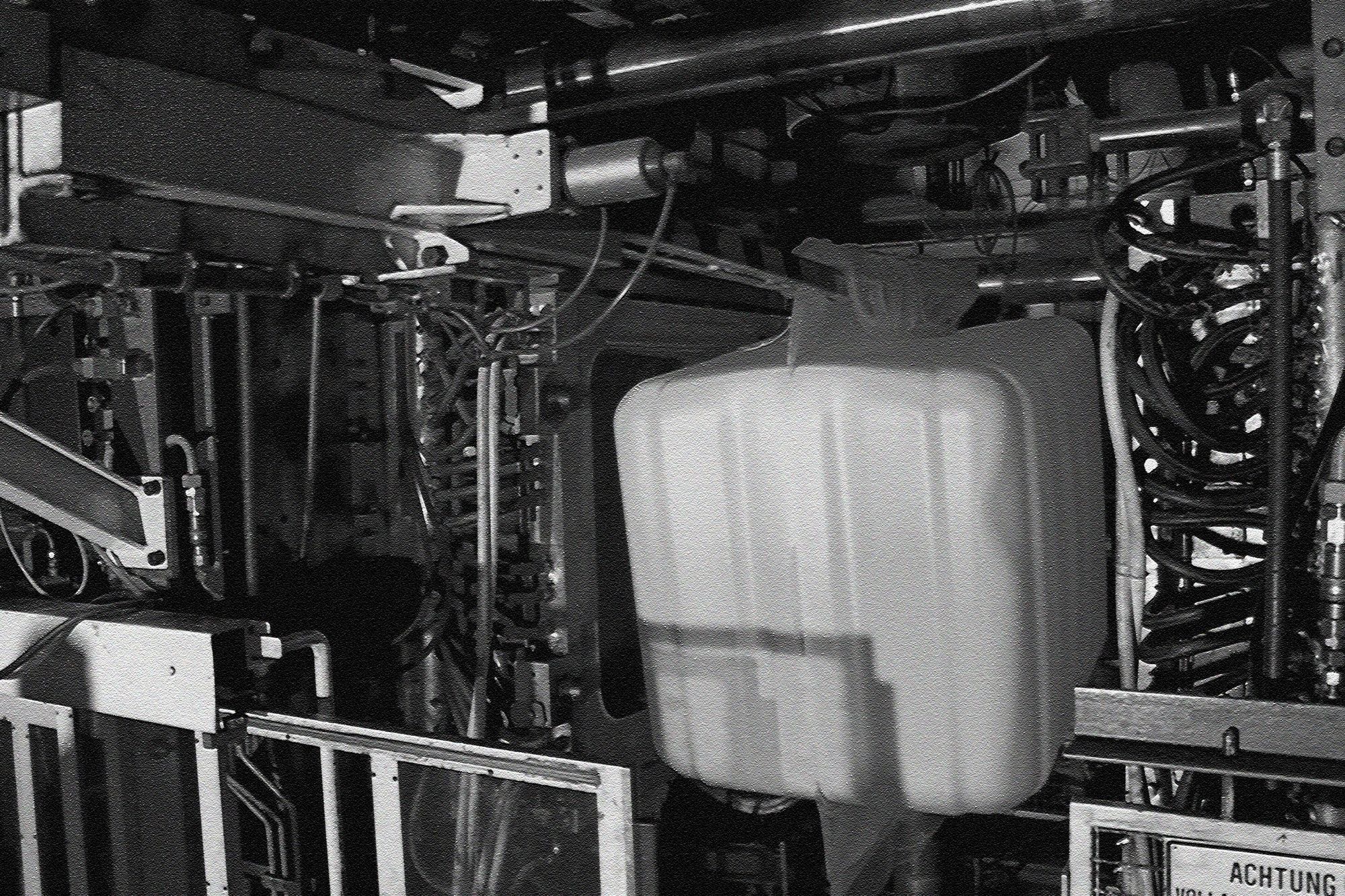 Launch of the IBC production

Series production launch for industrial pallet containers (IBC). Liquids and pasty fluids were able to be transported in containers of 600 - 1,000 litres. The IBCs meet the standards of a wide range of dangerous goods classes and are subjected to continual tests by the official approval agencies. Due to different approvals, the WERIT IBCs can be used to transport food products and hazardous goods. 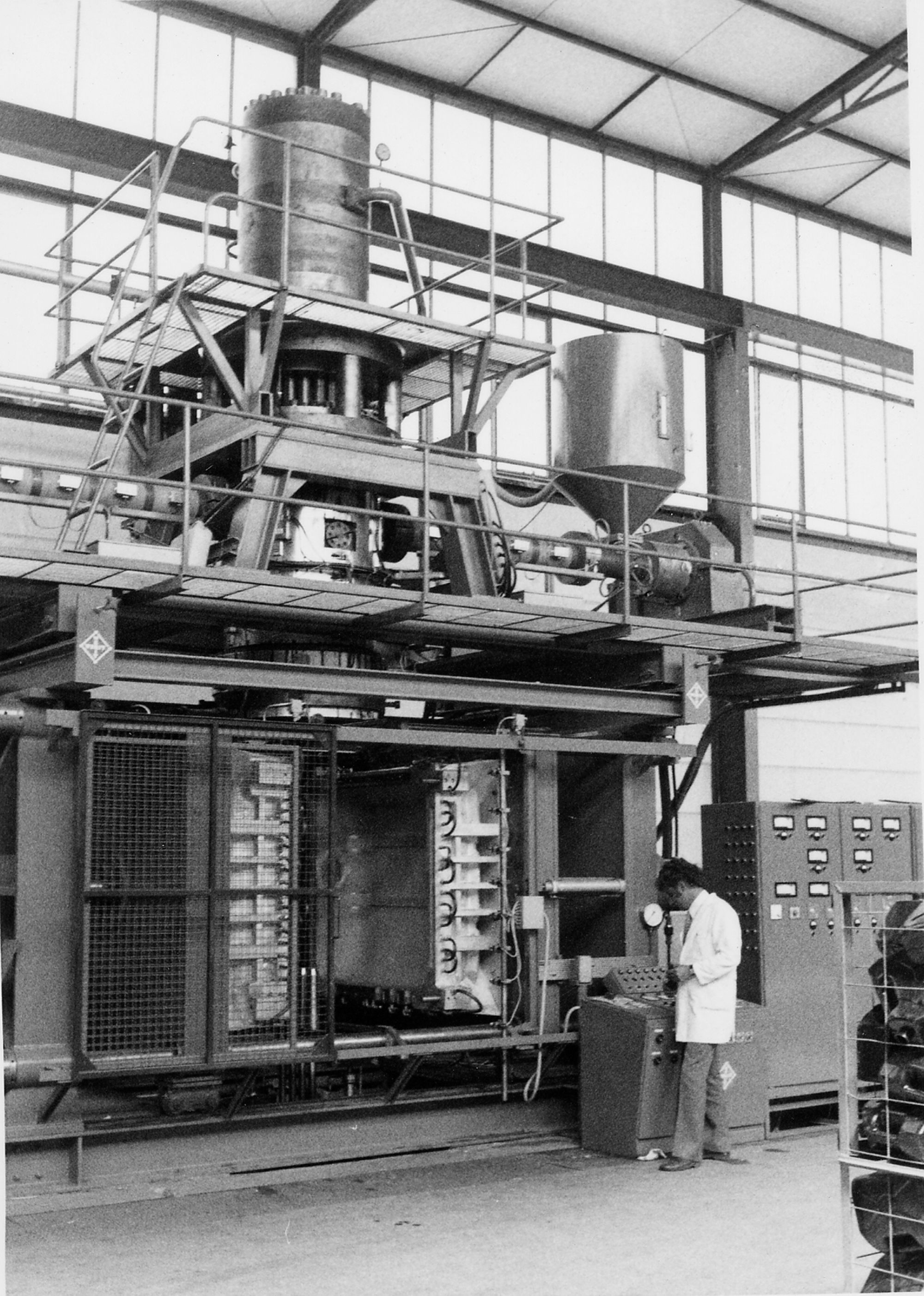 In-house construction of the world’s largest extrusion blowing machine at the time for the production of single-process blown heating oil tanks with a volume of up to 5,000 litres. Development and manufacturing all occurred under one roof. 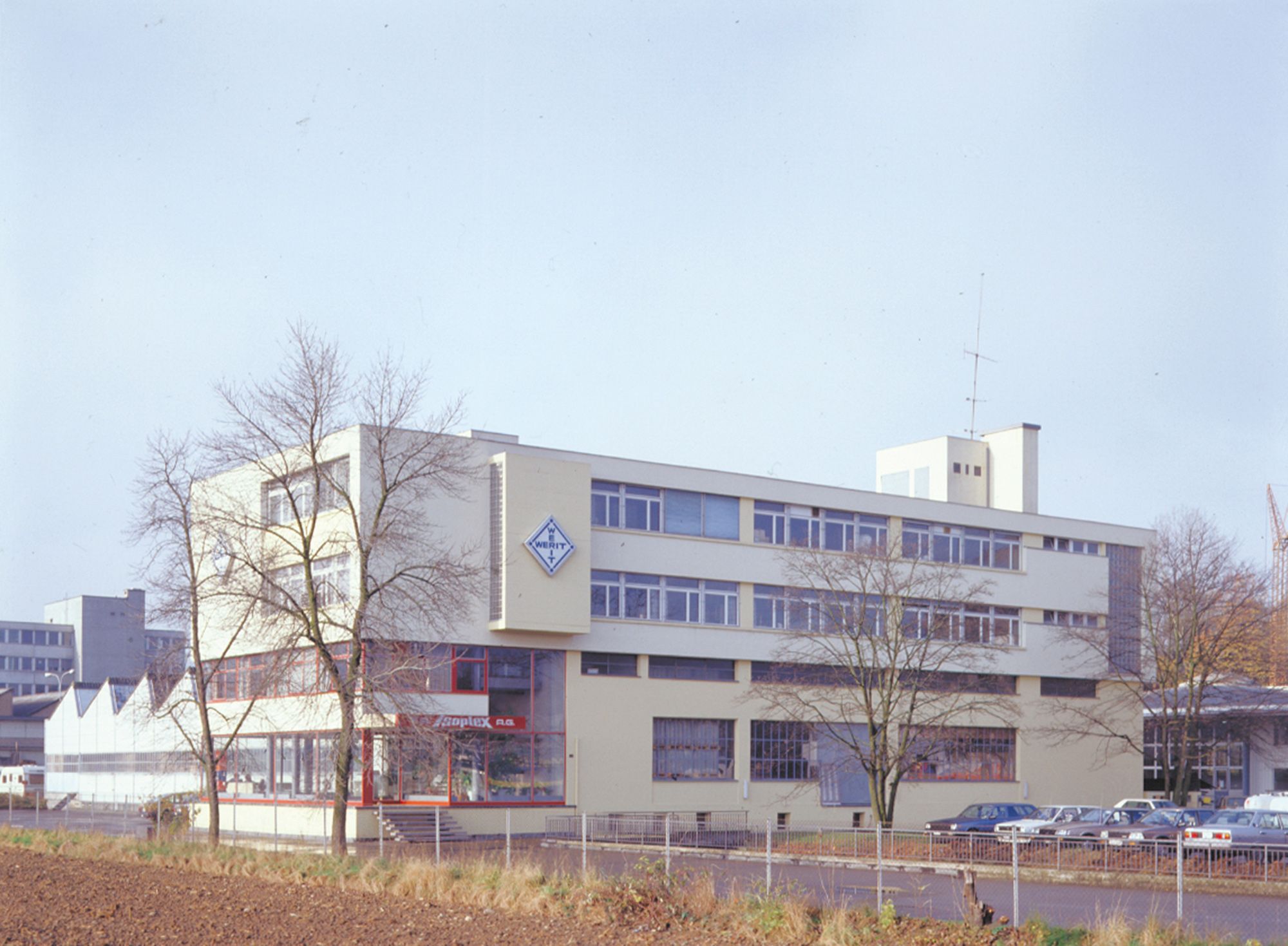 Acquisition of Isoplex AG, the path was levelled out to become a European group of companies. 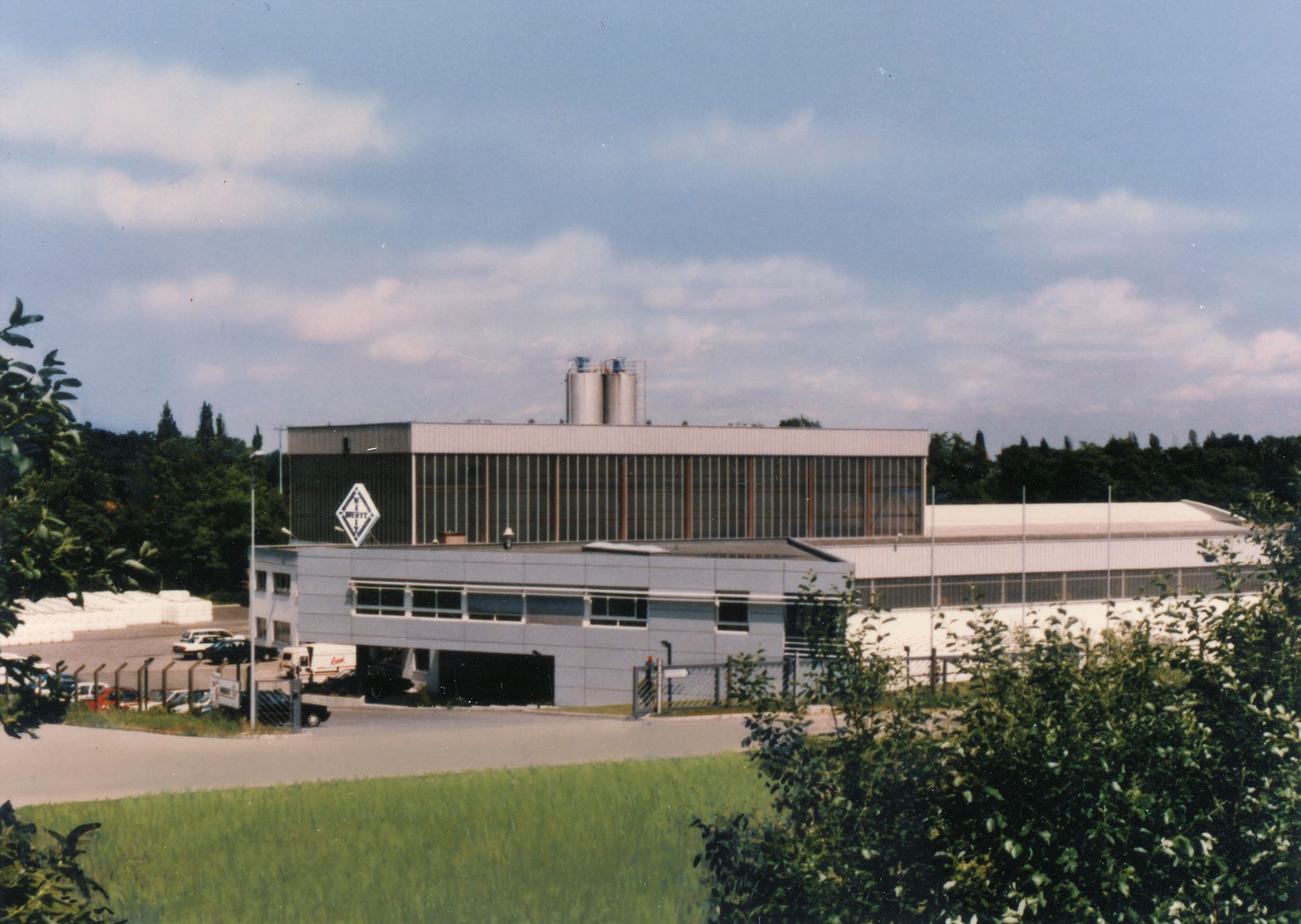 In search of a suitable production location for heating oil tanks, we found a place in Wissembourg in Alsace, France. From this location, we satisfied the needs for pa heating oil tanks in South Germany, Switzerland and in Austria. 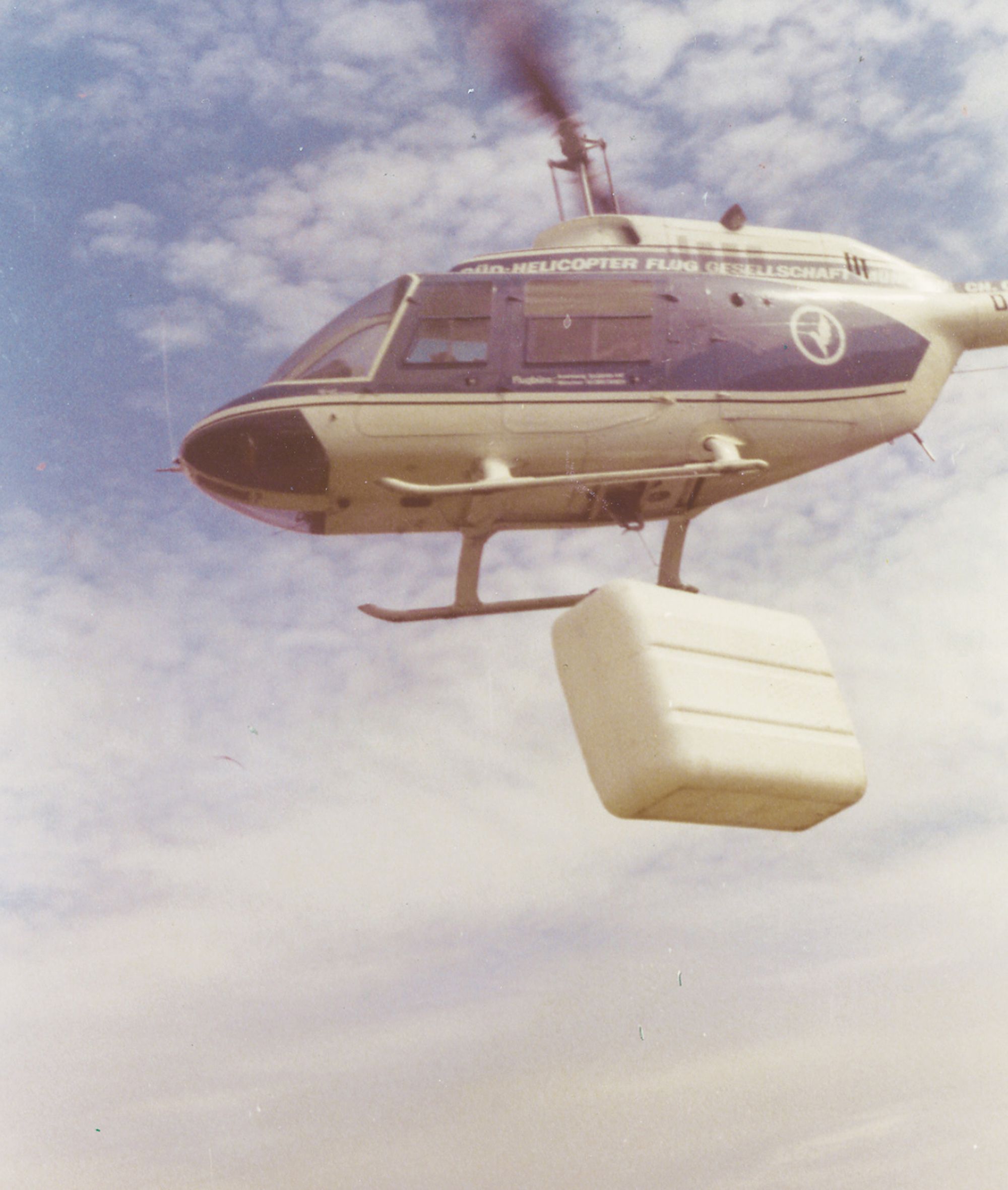 At the ISH (International Trade Fair for Sanitary, Heating and Air Conditioning) WERIT presented the largest heating oil tank ever blown in one piece with a volume of 2,000 litres to the world of industry experts. 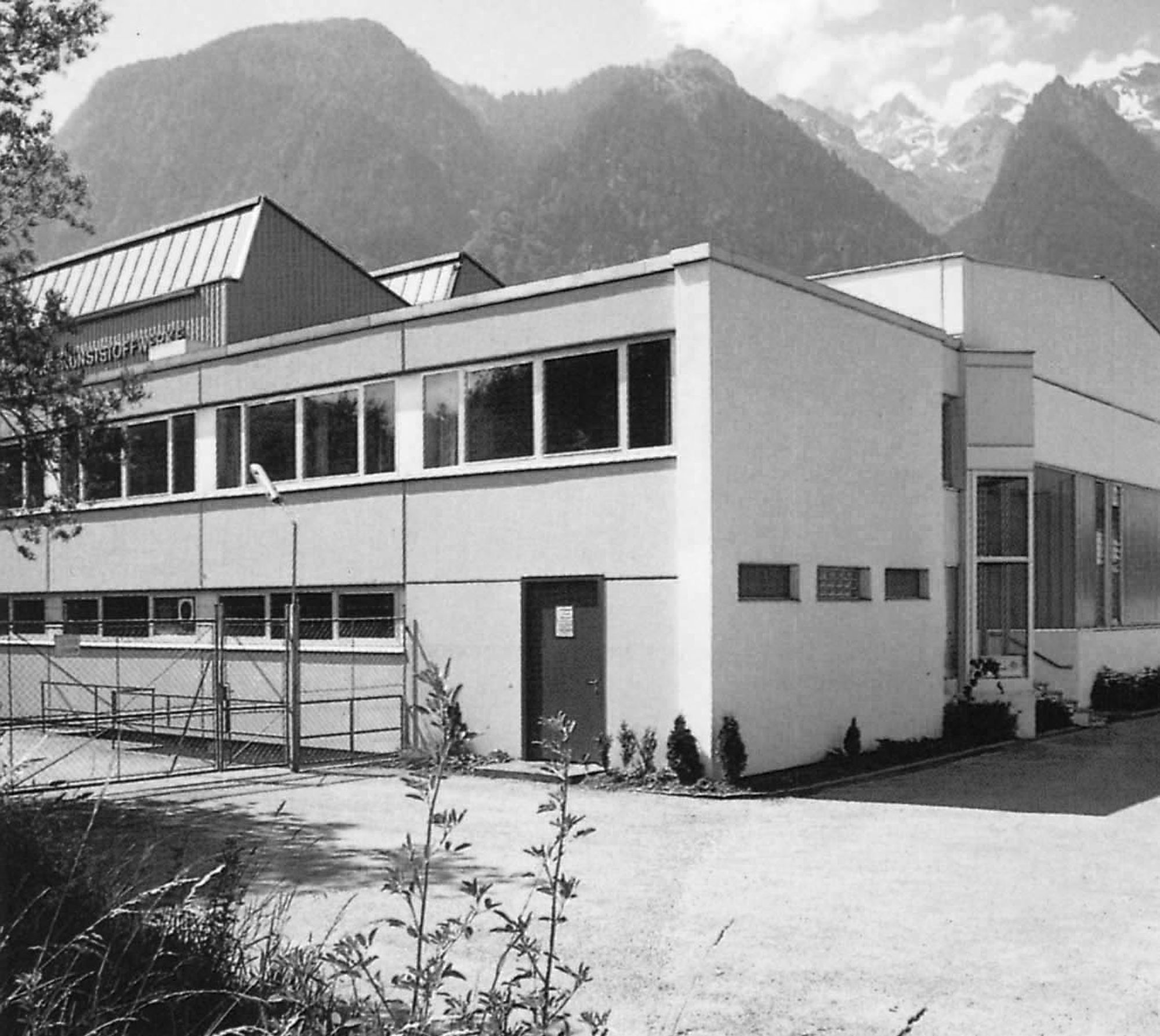 The location Bludenz was setup in the picturesque Vorarlberg (Austria) in 1969. Since then, the injection moulding and blow moulding takes place here. 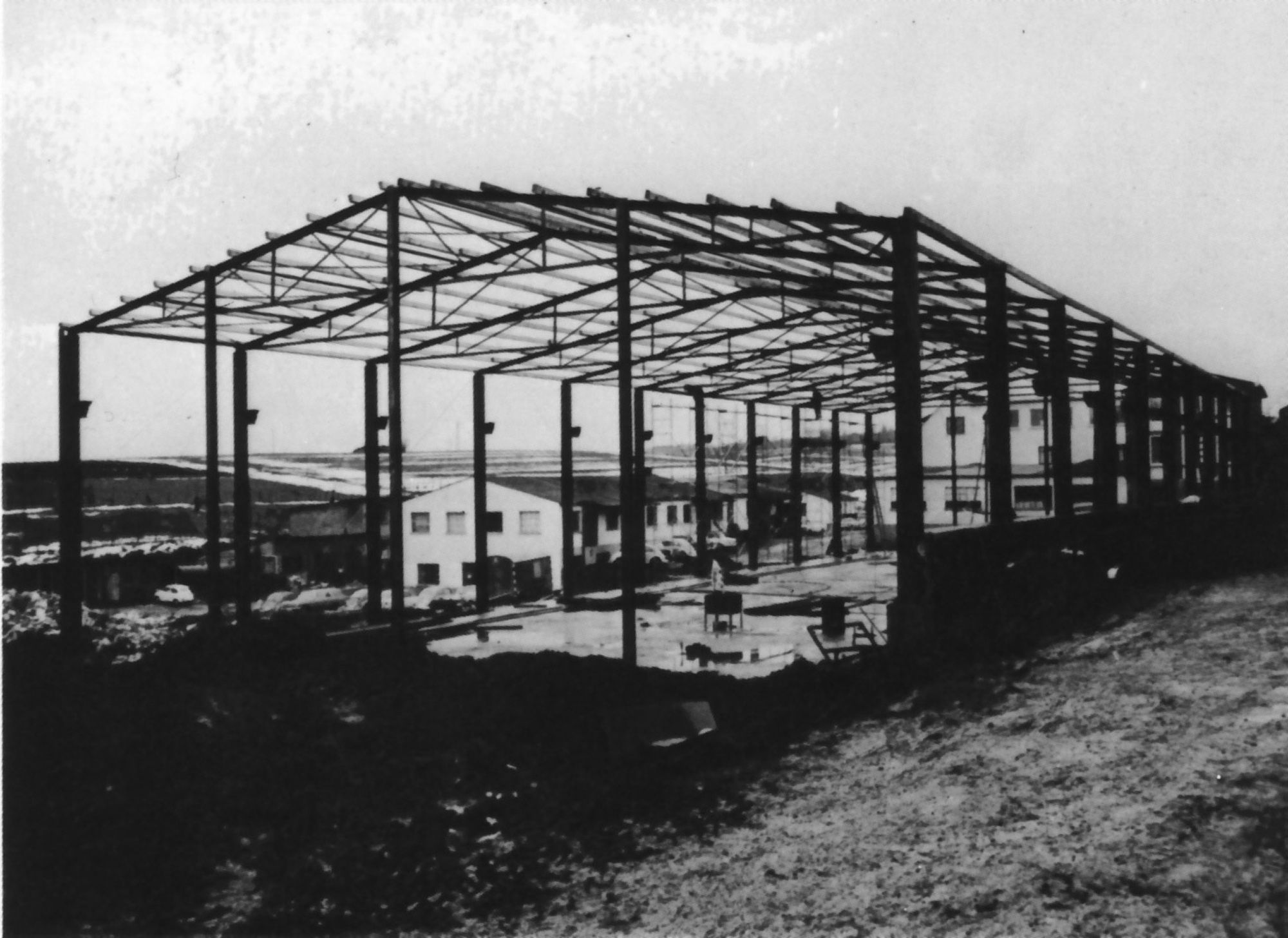 Construction of a new hall for injection moulding machines which were able to produce items weighing up to 17 kg each. This set the course to manufacture bottle crates as well as storage and transport containers. Being a pioneer in the industry, WERIT supplied products for dairy processors, breweries and fresh beverage manufacturers. 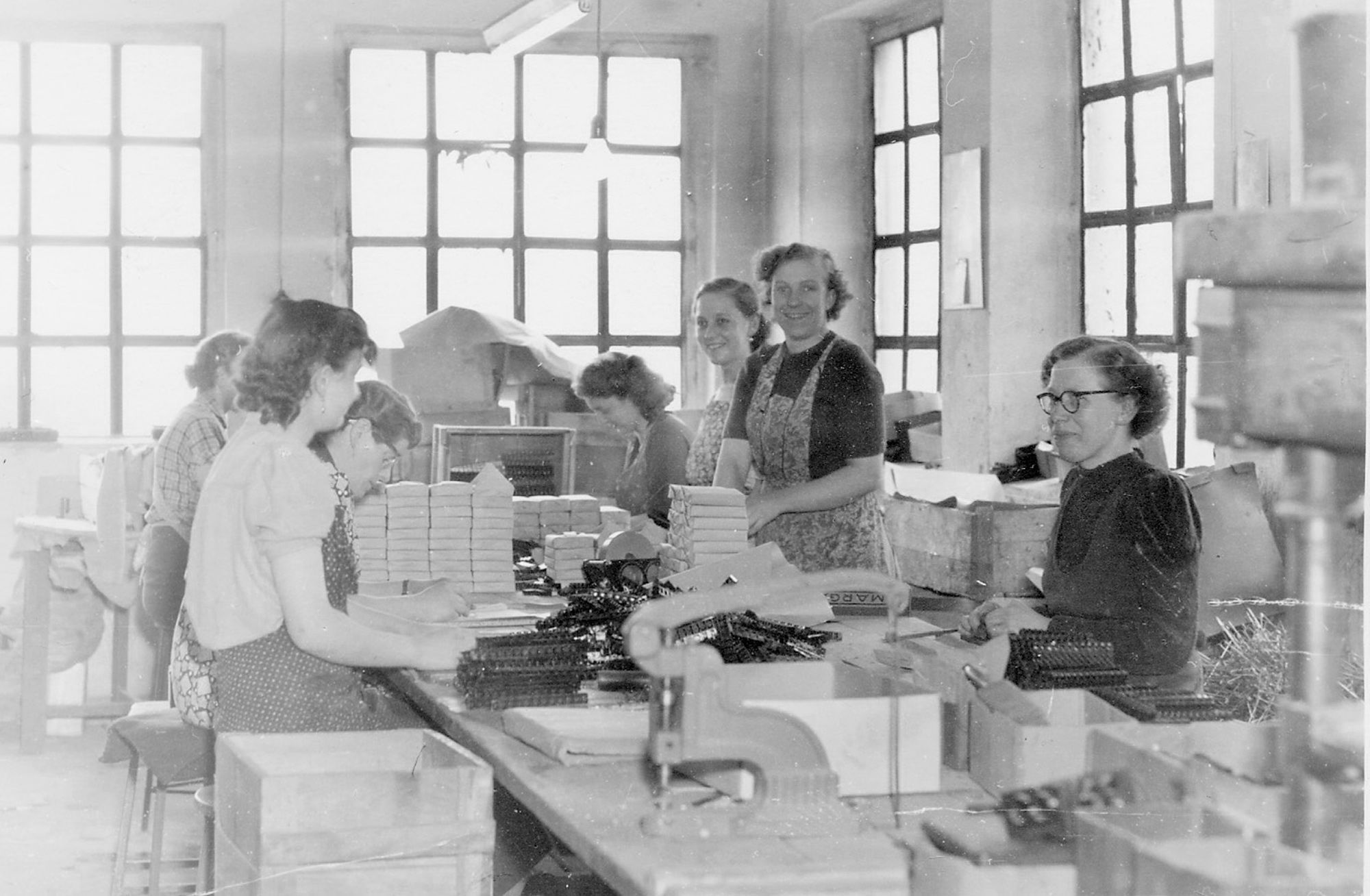 Due to the excellent insulation properties of plastics, the company initially made products for the electrical industry. Duroplastics, better known under the name Bakelite, heat resistant plastics, were manufactured by the application of strong pressure. For this reason, many insiders still refer to our company as the "Presswerk Schneider". During the 1950s, the company built up its own production range and developed its own tools within the company. This allowed the company to respond to new requirements quickly and flexibly. 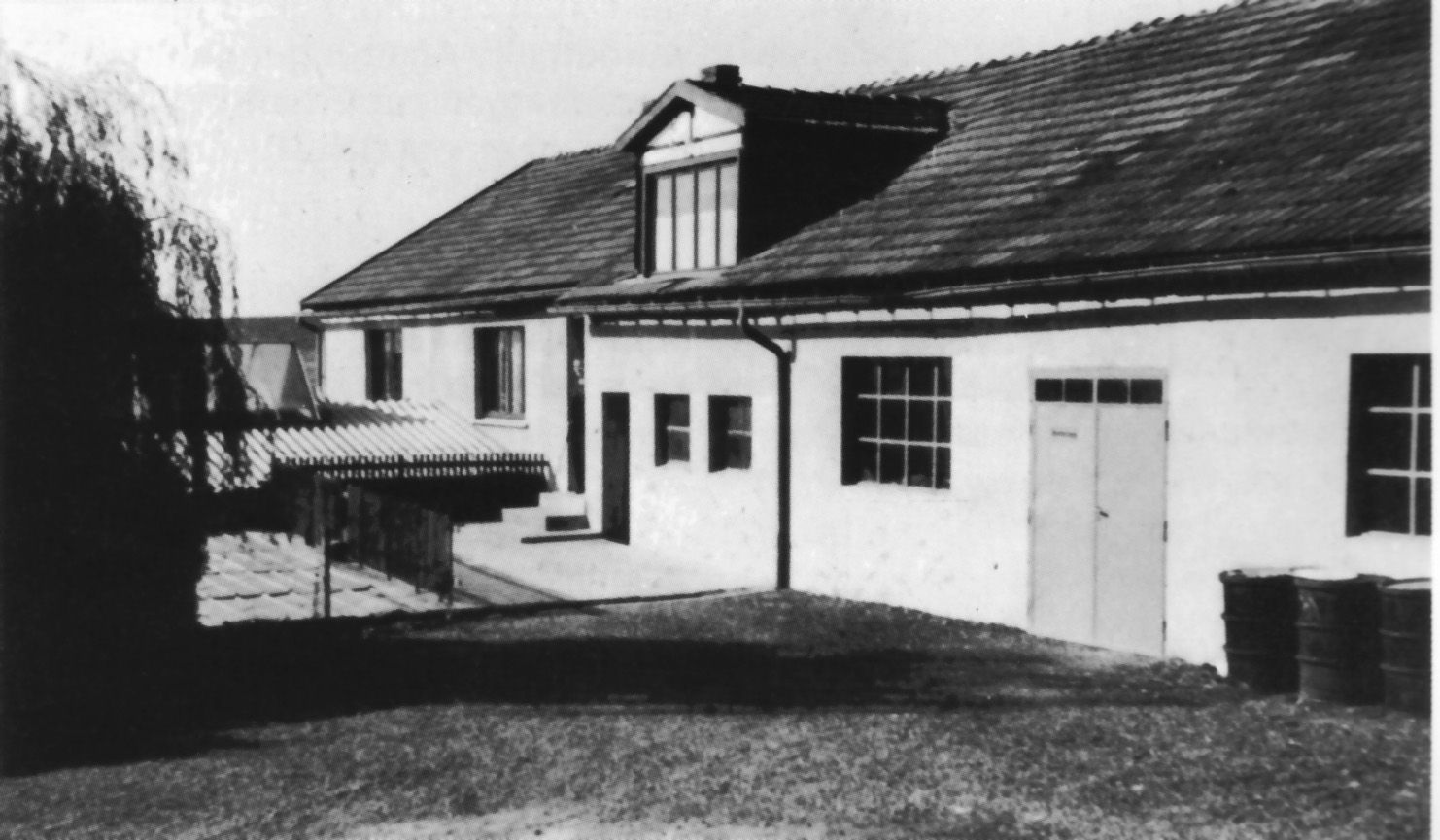 The engineer Wilhelm Schneider and his son Helmhold Schneider purchased a small production facility located on Kölner Straße in Altenkirchen, Germany and established their own company, WERIT Kunststoffwerke W. Schneider.

We distinguish ourselves in our flexibility and delivery reliability. Together with our customers, we develop solutions for highly specialised application case. We create our unique selling proposition by customer orientated product development and focusing on challenging markets. Our diversification strategy secures the existence of the company over the long term.

A sensible alternative to drums

WERIT launched the first COMPACTline IBCs on the market in summer 2017. Since then, the small IBC with a capacity of 300 litres has been steadily developed further and now stands on a robust plastic pallet specially developed for it, is UN certified, approved for foodstuffs and is gaining more and more market share.

Modern design with the JOMO EXCLUSIVE in matt black

In terms of trends, the colour black is currently a must. Not only in the living area but also in the bathroom, this theme creates a relaxing ambience. Black may not be a bright colour, but it is an absolute eye-catcher. Turn your bathroom and WC into an extravagant but also a peaceful, timeless classic.

The IBC Food Family is complemented by the NUTRiline aseptic

NUTRiline packaging is specifically designed to meet the needs of the food industry. In production and logistics, the higher requirements for material and hygiene are met. As an Intermediate Bulk Containers specialist, WERIT offers storage and transport solutions for various industries. With a variety of product lines available in four sizes and with a choice of equipment, we specialise particularly in the food industry. The parts of an IBC that come into contact with food must meet extensive requirements in order for an IBC to be suitable for the food industry. The materials used must comply with the specifications of the food regulation EC 10/2011 and the FDA and in many cases should also be Halal and Kosher. The manufacturing processes must comply with HACCP and GMP requirements, which is ideally certified by the appropriate management systems such as BRCGS or FSSC 22000.

The plastic pallet of the food industry

The GS1 certified EURO H1 hygiene pallet is the leading hygiene pallet and sets the standard for the European food industry. The EURO H1 pallet made of plastic is considered the leading pallet for all hygiene-sensitive applications in areas such as food, chemicals or pharmaceuticals. With the certification by GS1 Germany, the reusable load carrier is exchangeable throughout Europe. In addition to the GS1 mark, the pallets also have the DIN-plus certificate and the GS mark for tested safety. Further product features are the high load capacity, the long service life and the special dimensional stability.

You are looking for an all-round pallet

For the distribution and storage of medium-weight goods, with the IKP 1213 and IKP 1215 WERIT offers an economical alternative as both plastic pallets are manufactured from single-origin HDPE reclaim. They are robust, dimensionally stable and durable plastic pallets in industrial dimensions of 1,200 x 1,000 mm, with 3 alternative 5 skids, and are particularly characterised by their diverse variation options and areas of application in the non-food sector, chemical or automotive industry.

The site www.werit.eu starts 2020 with a new layout and a new corporate design. The motivation behind this was to create a new level of user-friendliness for the web design as well as the contents and the development. Users are navigated through the wide range of products due to a significantly simplified navigation. Information and contact partners of the individual production ranges and countries can be found quicker and without any problems.

You are planning to change from wooden pallets to plastic pallets

WERIT stack and nest containers are the first choice for sustainable solutions when one considers the current climate debate and the use of plastic waste.

NO BAN ON OIL HEATERS

Is there a specific ban on oil heaters? Are you going to be penalised if you keep your oil heater in operation? Or will you have to remove your oil boiler from the cellar until the end of the year?

WERIT is expanding its stack and nest container series DSB-N

WERIT stack and nest containers are being successfully used in the food and non-food industry. Due to the high demand, WERIT has expanded…

WERIT celebrates its anniversary and jubilees

Everything began in 1949 with the acquirement of the first plastic Bakelit presses and the production of electric connecting clamps.…

For the transportation and storage of particularly exquisite oils, now a comparatively small IBC (Intermediate Bulk Container) with 300…

AMIDORI fine-tunes the intralogistics to be more efficient

AMIDORI optimises the in-company logistics with a stack and nest container system from WERIT. The new packing solution has been proven and…

With the new 300-l-IBC COMPACTline, WERIT offers the ideal packing solution for sensitive filling media with short shelf life. Due to its…

At their location Buchholz (Westerwald), the WERIT Kunststoffwerke have started with the manufacture of EURO H1 hygiene pallets. The new fully automated production line is the most modern system of this type in Europe.